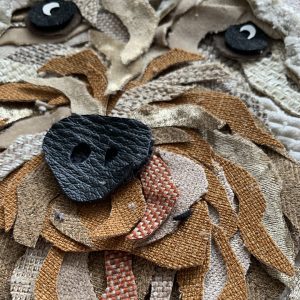 Cushy Paws initially started when I was still studying at Loughborough University in my placement year (year out in industry).  I always wanted to travel and my year out in industry was the perfect chance to do so. However, I needed to raise the money to support it. We had just had a family pet, our first Dog, Millie the Cockapoo. My mum and I were trying to make her a dog bed out of old vintage suitcases that we had found in a charity shop, so we wanted two cushions to put into it to make it into a bed, but we wanted them with a dogs face on… and my mum said, ‘why don’t you try and make one’… so I did.

So on my next placement at Margo Selbys in Whitstable I took my sewing machine and collected some fabrics from a charity shop and it went from there. I started selling to friends and family and posting a few posts on facebook, and it started to grow and the word spread.

Ironically, I used to hate sewing machines and dogs,  I say hate.. I mean I was petrified of dogs and sewing machines I just tried to avoid them at all costs.  I studied textiles GCSE and successfully avoid using the sewing machine for most of my time… until my parents decided to buy me one for Christmas one year… as you can imagine that didn’t go down very well with a teenager. Now I thank them, but at the time I was extremely unimpressed (considering I hated using them). And for the dogs… I don’t know why I was just so scared of them, my friend used to have to put her dogs in the other room when I visited her, now we have our own and I love both sewing machines and dogs.